I am, as you may have figured out, very lazy. Well, I alternate between very lazy (out of milk for tea and the store is a whole block away? Please pass that sweetened condensed milk) and incredibly perfectionistic (Why yes I will spend 4 hours frosting that cake, thank you).

This is one of those times I prefer to be very lazy. I first saw this salad in a Cooks’ Illustrated magazine. By now it’s been years and I’ve mostly forgotten their exact recipe (I no longer have website access), but what I do remember is being terribly offended that they would dare to ask me to spend an extra 5 minutes roasting corn for better flavour. I mean, of course, they’re right, but that’s besides the point. I have pride in my laziness, after all. I’ve got a reputation to uphold. And when it’s hot out, the last thing my lazy self wants to do is turn on the stove. 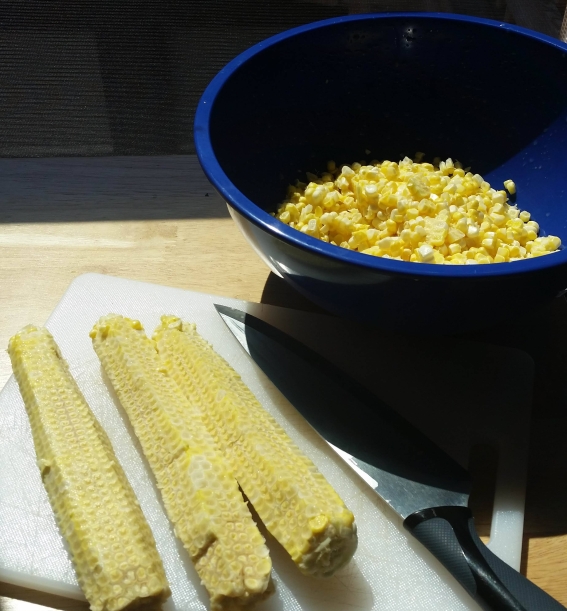 So I downsized their salad and tweaked it for us lazy people. When it’s hot outside and your brain is slowly melting and the ice you put in your drink disappears as soon as you drop it in– then make this salad and just let your mental ability to do anything float gently away.

I made this salad for a picnic to the beach with my love. We brought this salad, and some popsicles, and chocolate ice cream cones, and had a lovely time looking out over the waves. It was in the evening just as it was cooling off, and we didn’t head back till it was getting twilight. It was a beautiful lazy day for some beautiful lazy people, and we enjoyed the heck out of it.

Get out a large bowl and cut off kernels with a large knife from each ear of corn, holding them upright in the bowl to avoid kernels coming off all over the place. Add the rest of the ingredients and stir gently to avoid breaking up the tomatoes.* Add more adobo sauce and/or salt and pepper to your own taste. Refrigerate and enjoy cold. Embrace the lazy.

*One of my friends pointed out for the Tomato Cucumber salad that coring the tomatoes reduces juice and makes everything less wet and soggy. I don’t core tomatoes because tomatoes’ main sources of flavour, glutamates, live in that inner goo, and because I generally like juicy soggy things. If you prefer a lighter and less wet texture (but less flavour), core the tomatoes. Make sure, to avoid pesticides, to get organic tomatoes.

6 thoughts on “Black Bean Corn Salad for a Beach Picnic”