From The Marvelous Machinations of Milena and Myles

About a month ago, my twin and I moved in together. Since we shared a room for the first 18 years of our lives, we know that any good home-creating begins with clear expectations, good communication, and some sensible house rules. We knew this because we did not do any of that for 18 years and ended up with some literal scars. Did you know that if one twin shoves the other one upwards in the womb, that other twin is capable of breaking their mother’s rib? Another interesting fact: if you kick your twin in the shin hard enough, they will limp for a week.

Our idea of house rules, of course, might not be what you were thinking of. Do we know whose turn it is to take out the overflowing trash? No. But do we have hyperbolic ingredient lists and overly intricate design sketches for the ambitious recipes we have to make this week? Hell yes. We have got our priorities right, kids. Creating a bizarre and tangled list of 100 recipe ideas, rolling a die every week, and then setting out to create said recipes together? That is an excellent house rule.

Here’s how it works.

This past week was our first foray into our experiment. I rolled a die and got a 96. Myles’s eyebrows went up, but they dutifully opened up their document and told me to roll for a random Dungeons & Dragons monster encounter. We got the following:

Our task was to create a recipe that was inspired by these monsters.

Of course, we couldn’t just make a cake. That would involve fondant and frosting and other things that are actually made for sculpting things like dragons, and are easy to add colour too. No. That would be too easy. And we rolled a 96. 96 warranted something more exciting.

I’ve always wanted to make hot water crust pastry, and this, I felt, was the moment. But what about the filling? We brainstormed and found some facts about blue dragons, then correlated each of those to a component of the dish.

We divided tasks, so Myles did the filling and I made the pastry and shaped it. Myles started with a root vegetable base, begun with caramelised onions and mushrooms.

Myles put together all the root vegetable filling, including carrots, potatoes, and an alchemical mixture of genius flavours (see below).

Meanwhile, I got to work on the pastry. The pastry I chose involves pouring boiling water into the dough, and to me it felt more like working with bread dough than piecrust. It is a little-known fact that one must always use a French bottle of wine that is lying around as a rolling pin for shortcrust pastry.

For the little pie, I decided to create a sandy landscape for our baby dragon to sneak attack out of. And of course he needed a harp. I decided to use blue cheese, butter, and flour as the base for the crumble that went over the filling of stew and mashed potatoes, and added a bit of rosemary for some more flavour. Then I shaped some of the shortcrust pastry into a dragon head and tail to emerge from the sand. 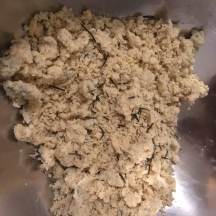 I wanted the big pie to be entirely dragon to emphasise his size– but at the same time, I didn’t want to populate the top of the pie with stodgy lumps of sculpted pastry. Finally, I realised I could shape the dragon body out of mashed potatoes and then put a thin layer of scales over it (thanks to The Curious Creations of Christine McConnell for giving me this idea with her chicken pot pie). The larger dragon was mainly potatoes, since I was asked to bring mashed potatoes to a Thankgiving dinner and this dragon became my companion for that event.

After some sandy crumble sprinkled around his feet, he went into the oven to bake beautifully golden brown. 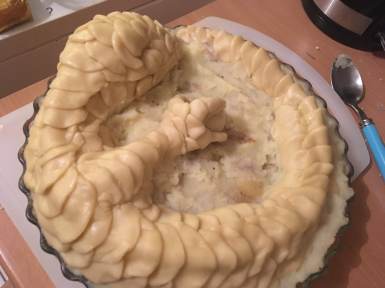 (Please excuse the vague nature of the temperatures and measurements in this recipe; working in a new kitchen in a new country has some interesting challenges…)

For the SMALL PIE:

For the LARGE PIE: Roll out a chunk of pie dough, then use two sizes of round cookie cutter to cut out scales. I’d suggest starting with about 1/3 of your remaining dough, cutting out an equal amount of both sizes, then reserving some pie dough for later so that you can roll it out, cutting new scales for filling in as you go.

~ Be Careful When Eating Dragons; They May Be Hot After Emerging From Caves~